Have you been excited by the debates, promises and coverage surrounding the UK general election? Are you fully aware that Polling Day is Thursday 7 May, just after this column appears? And later on in the year will you be even more switched on by our own election here in Gibraltar? If the answers are “no” then further reading may not be recommended. This piece takes a topical view of elections in general and their influence on the financial aspects of our lives in particular,

You may already have gathered that I can answer those questions with an emphatic “yes”. And I go further: I am already fascinated by the forthcoming general election in Spain where voters will be asked to acudir a las urnas on or before Sunday 20 December this year – the date is fixed in law.

Yes I have well and truly caught the election bug. I’ve got it bad and in fact it goes further for, dear reader, I am a (hitherto, secret) psephologist, fascinated by the “-ology” that goes with it. Psephology is defined by the Oxford dictionary as “the statistical study of elections and trends in voting.” In my case, this fascination with the electoral process is nothing new; I remember listening clandestinely to the US presidential election results under the bedcovers as a boy. I won’t reveal which president for I feel old enough already suffice to say that my contemporaries were tuning in to Radio Luxembourg at the time! I thought for this month’s column I would consider the elections happening around us focussing on their importance to the state of the financial world as it recovers from the global crisis of the last few years.

First of all, I start with an important disclaimer. Last month’s column entitled “Is Offshore Really ‘Orrible” generated a larger than normal postbag some of which suggested that I had been somewhat more controversial than usual. It certainly wasn’t my intention but hopefully the subject attracted people’s attention and generated some interest. Therefore, it is with more than a little trepidation that I dedicate this month’s piece to elections. I am acutely aware that writing about the subject is a risk – after all I have always been advised to avoid politics, religion and certain other areas. So let me make it clear: I am not suggesting how anyone should exercise their vote i.e. in any particular direction. That is after all the point of democracy. But I do think it vital that we play our part and engage in the process.

Sometimes, one doesn’t have a choice when it comes to electing a government. In more than twenty countries worldwide, voting is compulsory – Australia is a good example. At the other end of the political spectrum of course, in far too many places, the general public remain unable to take part in a fair and open democratic process – even in 2015. This is the main reason why anyone telling me “they never vote” or “it makes no difference” is likely to find me jumping on to my psephology band wagon once more!

But let’s return to the finance element of all of this. Eight years ago, “We Live in Financial Times” was launched as a slogan for a major British newspaper (no prizes though for guessing which one I’m afraid). “Be careful what you wish for” could have been another useful phrase to choose at the time for in the period since 2008, we have lived through the most “interesting” financial times ever seen.

Of course for many people, more appropriate adjectives than “interesting” will be employed. The crisis has left individuals, families, organisations and in some cases entire countries financially broken. All around the world, the crisis exploded from 2008 although the effects manifested themselves in different ways. Similarly, the global recovery is starting to happen – but at startlingly uneven rates across the world. The situation in Britain for example is unlike that in the rest of Europe and the US position is again different. For me, this is one of the main reasons why the elections that are planned for 2015 are so important.

Focussing on Europe, the Greeks went to the polls in late January where the economy – and specifically how to repay her massive international debts was the dominant issue. Syriza came to power as a result and since then has been negotiating with the “troika” – that includes the European Commission, the European Central Bank and the IMF –over debt repayment. Similarly, the UK election has concentrated on the economy as a recovery takes hold although other issues such as a possible referendum on EU membership, immigration and the Scottish question have all taken centre stage too. In Spain later in the year, the economy will be a key issue although it will be fascinating to see too how the established political groupings deal with the new Podemos and Citizens parties.

For us in Gibraltar, as one of the most “switched on” electorates anywhere, our general election will doubtless be fought on local issues but the results of the UK poll are likely to leave their mark. For example the possibility of holding an “in-out” referendum where Britain considers its future relationship with the EU will of course be followed closely.

The main reason elections affect financial markets is when uncertainty dominates. Any indecision can be severely punished so that currency and stock markets are adversely affected, or even the interest rates countries are charged when managing their own international debt. By their very nature, elections cause uncertainty and in recent times, coalition governments have become the way of life in many European countries. Since 2010, the UK too has seen its first coalition for 65 years that could be followed by another, depending on the UK result on 7th May.

Think about any election you have taken part in – as a voter or maybe even a contender. Electioneering is all about promises and convincing the electors that a candidate has the best grasp of the issues at hand. For most people, finances, be they one’s personal affairs or perhaps the nation’s overall financial position are likely to be uppermost in the mind as votes are cast.

It is worth considering though that in times past, the country’s defence was by far the most important area to consider. Indeed the UK government states that providing security for the nation and its Overseas Territories (that includes Gibraltar), safeguarding its citizens and their way of life remains the most important responsibility of Government.

In most cases of course, governments are charged with the administration of a single country. Increasingly, most have to work with wider supra-national bodies that in financial terms can be very intrusive. Perhaps the best example is the European Union itself which sets rules for twenty eight countries to follow that must be rendered compatible with individual countries’ laws – sometimes a very hard thing to achieve.

So there you have it – a brief overview of how the financial world dominates elections and by extension we psephologists. But don’t take my word for it. Back in 1992, Bill Clinton was asked why he should be elected in place of President Bush. A simple, if somewhat insulting response followed – but one that rings true over twenty years later: “It’s the economy, stupid”. Maybe we’re not stupid but the first bit is certainly true. In all the elections we are seeing taking place around us this year, the financial situation dominates. Enjoy the debate! 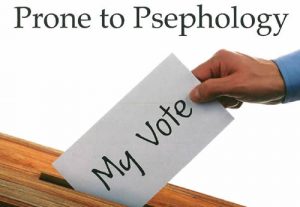