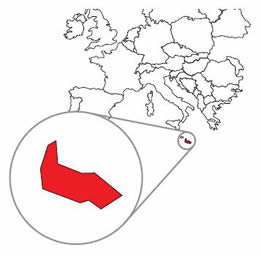 Malta is an independent republic, having gained independence from the United Kingdom in 1964, situated in the centre of the Mediterranean Sea about 60 miles south of Italy and 180 miles north of North Africa. Government is exercised by a democratically elected parliament with elections being held every five years. Population is approximately 430,000. English and Maltese are the official languages but Italian is also widely spoken. English is the business language. Malta is a member of the Commonwealth of Nations and a member of the European Union.

The legal system is based on the Napoleonic code but British Law has had a strong influence particularly in fiscal and commercial law, company law in particular is based on English law. The currency is the Euro. Malta has an extensive range of over fifty tax treaties in force at present.

Maltese non-domicile residents are taxed only on income remitted to or arising in Malta on a tiered rate up to 35%. There is no minimum annual remittance and no tax is applied to the movement of capital into Malta.

An EU/EEA citizen has the right to enter, work and reside in Malta. When the individual intends to remain in Malta for a period in excess of 3 months then he or she is obliged to apply for a residence permit from the office of the Department for Citizenship and Expatriot Affairs (“DCEF”). In order to reside in Malta the individual must either work or be economically self sufficient.

The process is reasonably straightforward and Sovereign Trust (Malta) Limited offers assistance with dealing with the application process. This includes our arranging for your appointment with the DCEF, advising on documentation required and accompanying you on the appointment itself. Normally two visits to the DCEF are required.

Our fee for attending to this would be charged on a time spent basis subject to our normal hourly rate of €150 per hour or part thereof plus VAT at 18% and subject to a minimum fee of €1,000.

Non-EU citizens do not have a right to settle or work in Malta and residency therefore depends on the provision of a work permit or special residency status. Under the Global Residence Programme (“GRP”) launched on 1st June 2013 however non-EU high net worth individuals can apply for a special tax status in Malta and benefit from a low flat rate of tax subject to the following conditions. EU citizens who meet these same conditions can also benefit from a 15% flat rate of tax under the Residence Programme Rules.

The applicant must either:

The property may not be sublet or shared and the property must be declared as the applicant’s principal
place of residence worldwide.

Qualifying individuals will benefit from a flat rate of 15 % tax on foreign source income remitted to Malta. There is no income or wealth tax on world-wide assets.

Local business or employment is allowed however income arising locally is taxed on the same basis as for residents under a tiered system with a top rate at 35%.

Irrespective of the amount of tax payable as a result of the above there is a minimum annual amount
to be paid of €15,000 p.a.

There is no minimum presence requirement apart from the need to visit Malta at least once annually.

Our fee for attending to the GRP application is charged at €10,000 which includes government fees and covers the applicant together with his spouse and up to 2 dependent children, where relevant.

It is necessary for the applicant to appoint a firm such as Sovereign to act as their registered agent with the Malta Department of Inland Revenue and for these fiscal representation services, our fees will be €3,000 per annum, plus vat and disbursements. This will be billed after the GRP status has been granted.

OTHER FORMS OF RESIDENCY

The Malta Retirement Programme (MRP)
The MRP is open to EU, EEA and Swiss nationals who are retired and are in receipt of a pension as their regular source of income. Persons eligible under this scheme will be subject to Malta tax at a flat rate of 15% on foreign source income received in Malta.

Qualifying Property Requirement
The applicant must either:

The property may not be sublet or shared and the property must be declared as the applicant’s principal place of residence worldwide.

RESIDENCY SCHEMES BASED ON EMPLOYMENT

In 2011 Malta introduced specific tax rules intended to attract top expertise and skill in the financial services, remote gaming, creative and aviation sectors to enable employers in these sectors to attract highly qualified and experienced personnel. As an incentive to relocate to Malta these individuals can take advantage of a favourable flat tax rate of 15% on their chargeable income.

Qualifying Property RequirementThere are no minimum property requirements.
The rules state that the applicant must reside in accommodation regarded as normal for a comparable family in Malta and which meets the general health and safety standards in force in Malta.

Highly Qualified Person Rule
This scheme is open to individuals employed with companies licensed and/or recognised by the relevant competent authority such as the MFSA or with undertakings holding an air operators’ certificate issued by the competent authority, consisting in the following employments or offices:

Applicants under this scheme benefit from a reduced flat-rate of tax at 15% on income from the qualifying contract up to €5,000,000 per annum. No tax would be charged on any qualifying income in excess of €5,000,000.

Qualifying Property Requirement
There are no minimum property requirements.

Non-EU Citizens and The URP
The Maltese Uniform Residence Permit (“URP”) affords the holder free movement around the Schengen area, without the need for a visa for three months in six.

URPs are issued subject to Article 4A of the Immigration Act and are, subject to EC regulation 1030/2002, in the specified format to be included on the holder’s passport in place of a visa. They need to be affixed to the passport of the holder on presentation in person at Valletta once every year. They are a European instrument and are available from all member states.

The freedom of movement is subject to a restriction that the holder of the URP must not be within the Schengen area for more than three months in any six month period. Malta is not counted for the purposes of this calculation since the holder has indefinite leave to remain under the GRP.

This three months in six months rule is enforced and must be observed. The dates of entry and exit to a country are always stamped on the passport so as to identify how long in any six month period the holder has spent in Schengen countries with the exception of Malta.

It is important to note that Maltese residency permits afford the holder the right to permanent residency in Malta and so in the below examples Malta is considered the same as the permit-holders home country for the purposes of calculating the three months in six rule and therefore the term ‘other Schengen area country’ means any country in the Schengen area with the exception of Malta.

Example 1
A Chinese businessman obtains Maltese residency and then obtains a URP. He flies to Malta on January 1st, collects his passport sticker and then transfers onto a flight for Paris. He spends three months in Paris then returns to China for three months. It is now July 1st and he can do the same again, he spends three months in Paris and then returns to China. In January of the following year he must return to Malta to obtain a new sticker.

Example 2
A retired Saudi national obtains Maltese residency and then obtains a URP. He flies to Malta on January 1st and spends a week there. He then returns to Saudi Arabia for three weeks. On February 1st he flies to Germany and spends a month there. He spends the rest of the six month period in Malta with occasional one or two day trips to Italy and Spain. Between January 1st and June 1st he has only spent six weeks in Schengen countries (outside Malta). By July 1st a new six month period begins* and he is entitled move freely for up to three-months in the following six months in other Schengen area countries.

Example 3
An Indian national living in Hong Kong wishes to travel in the Schengen Area but wants to visit Malta as infrequently as possible. He must visit Malta at least one every year if he wishes to take advantage of the URP because he will need to attend Valletta with his passport to receive the URP sticker. After he has got the sticker in his passport a six month window begins. In this six month window he is allowed to spend not more than three months (cumulative) in the Schengen area. At the end of the six month period a new six month period begins* and the same is true. Next year he can get a new sticker in his passport and do the same again.

Our fee for attending to this would be charged on a time spent basis subject to our normal hourly rate of €150 per hour or part thereof plus VAT at 18% and subject to a minimum fee of €600.

For more information email info@SovereignGroup.com or click here to find your nearest office.

Whilst every effort has been made to ensure that the details contained herein are correct and up-to-date, this information does not constitute legal or other professional advice. We do not accept any responsibility, legal or otherwise, for any error or omission.