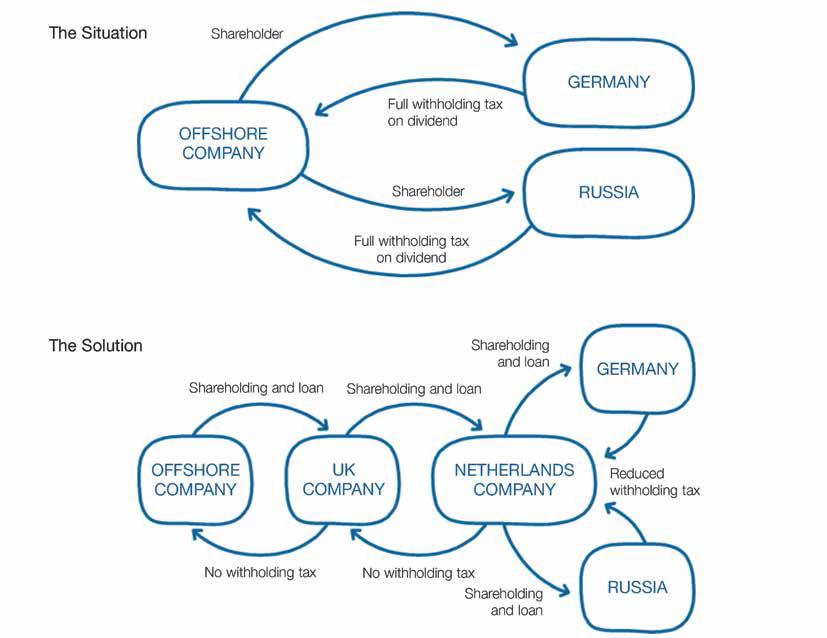 The Situation
Mr D is purchasing the majority of the shares in two successful companies, located in Russia and Germany respectively. Both businesses may require loan finance to be made from the holding company and both businesses are generating good dividends. There is also a five-year exit strategy that is likely to result in a large capital gain that would be taxable for Mr D in his home country.

The Solution
The shares in the Russian and German companies should be purchased using a Dutch company. The Netherlands has a tax treaty with Russia that reduces the withholding tax from the usual 15% to 5%.

The Netherlands also has a tax treaty with Germany but it is simpler to rely instead on EU Directive 90/435, which applies when a dividend is paid by a subsidiary located in one EU member state to a holding company located in another EU member state. Subject to certain conditions, this EU Directive requires that no tax should be withheld on the dividend at source. As both the Netherlands and Germany are full members of the EU, dividends can flow from Germany to the Netherlands free of withholding tax.

A Dutch company can benefit from the “participation exemption” which means that dividends received in the Netherlands are exempt from Dutch tax. Interest can be paid, from either Russia or Germany, to the Netherlands at reduced levels of withholding tax due to the respective treaty or the EU Directive on royalties and interest.

A Dutch participation exemption company is exempt from capital gains tax on the resale of the shares in the German or Russian company.

Dividends paid out of the Netherlands would be subject to Dutch withholding tax; so a tax efficient exit is required. To achieve this, the Dutch company should be wholly owned by another tax efficient EU holding company, such as a UK company. Under EU Directive 90/435, no withholding tax would apply to dividends paid between the Netherlands and the UK. The UK company would not incur any charge to tax on dividends received in the UK nor would tax be withheld on dividends paid out of the UK to the ultimate owner.