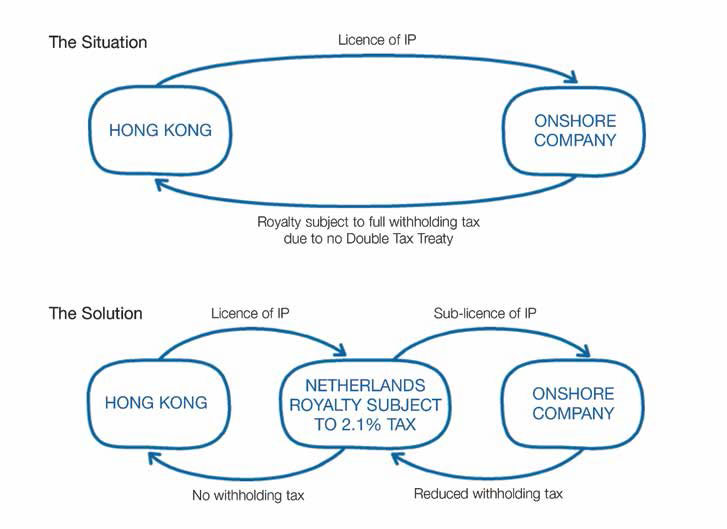 The Situation
A Hong Kong resident, Mr K, has developed software that he wishes to sell throughout the world. Generally, Mr K’s income stream will consist of royalties.

The Problem
Most high tax countries require tax to be withheld at source on a royalty before payment. Hong Kong has few tax treaties so generally tax would have to be deducted by the payer from the royalties paid.

The Solution
Mr K should set up an intermediate licensing company in a country that does have tax treaties with the countries from which payments emanate. The Netherlands is generally considered the country of choice, but other jurisdictions with tax treaties, such as Malta, Cyprus or the UK, may also be suitable. In this example, Mr K would license a Dutch company to exploit his software, which would in turn sublicense the end user. Royalty payments would be made to the Netherlands rather than directly to Hong Kong, thereby reducing or eliminating the withholding tax because the Netherlands has a treaty with the country of payment.

The Dutch company would receive the royalty income but also has a duty to pay out royalty income under the master licence agreement with Hong Kong. Only the margin between the two would be profit subject to tax in the Netherlands. The amount of the margin that is required to be held in the Netherlands will vary from case to case and specialist advice will be needed to determine the correct amount.

Notes
Many tax treaties now contain “limitation of benefits” clauses which provide that, if the recipient company is not majority-owned by Dutch residents, then the tax treaty cannot apply. In such cases, using a collection service can be highly effective. In other words Dutch residents would beneficially own the Netherlands company and their fees would be the margin that must be held in the Netherlands. Sovereign can provide this service.

A number of other high tax countries might be used as a base for the intermediary licensing company.

All businesses have Intellectual Property (IP), whether it is their brand, logo, know-how, systems or products. This IP is often the most valuable assets of the business so it is a mistake not to protect it by holding it in a separate company and by taking steps to register it where possible.

Remember the general rule is “trademark it or lose it”. Registering into the name of an offshore structure gives great protection and tremendous tax planning opportunities because that offshore entity can then license its own group of companies, enabling the group to extract pretax profits from high tax areas.