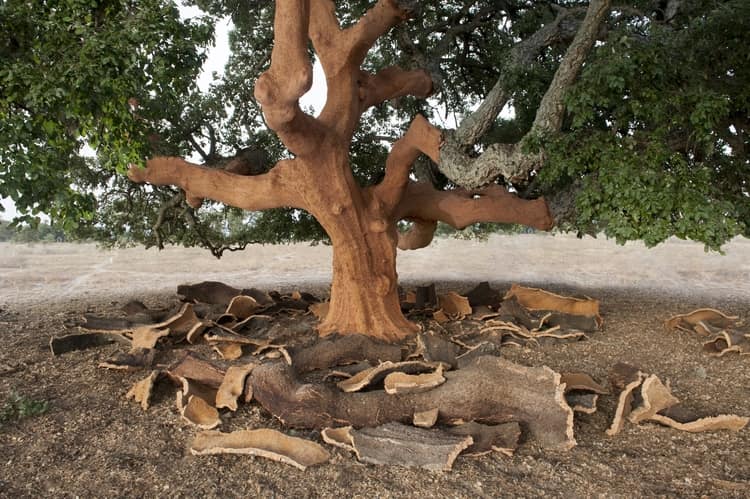 Of all the various ways we are being told to help save the planet I’ve found one I like the most: drink more wine. Not just any wine, the nice man at the world’s biggest cork producer told me, but wine stopped with a cork.

Portugal produces half the world’s cork, and the majority is grown amid the rolling hills and cork oak forests of our new home, Alentejo. We have cork oaks scattered across our hillsides, and the dirt road to our land is lined with beautiful, mysterious forests of them – each tree bearing a number boasting the year when it last had its bark harvested.

Every hot Iberian summer, men with axes roam the countryside climbing trees and carefully cutting just deep enough to peel off the cork bark, but not too much to damage the tree – nine years later it’s ready to be harvested again.It supports a whole sustainable, biodiverse ecosystem known as montado, and cork oak is Portugal’s national tree, protected since 1209, where cutting one down can land you with a hefty fine. And it is the carbon sink that keeps on giving, according to António Rios de Amorim – the fourth generation chief executive of the 150 year old Amorim cork empire.

“For every single tonne of cork produced we are talking about 73 tonnes of CO2 that are captured,” he said. “And no cork tree is cut – only the bark is peeled off – which means the tree never interrupts its carbon capture throughout its very long life of 180 to 200 years.”

So every single cork stopper is carbon negative – drink enough, so the argument goes, and you might be able to offset a return flight to Portugal. Just saying.

I was warned a day at the Amorim cork factories near Porto would change the way I look at the simple stopper, and they were right. My fascination with all its other uses is turning me into the cork bore at a dinner party. “This isn’t just about noticeboards, shoes, underlay and insulation,” I might say on the sixth of seventh cork of the evening. “Cork is now being used as the base for artificial sports field turf, shock-absorbers for concrete bridges, in electric cars, aircraft and as heat protection for space rockets,” I might add.

But wine corks are the core of the business, and last year Amorim produced 5.8 billion of them. On a vast factory floor we watched some of them get punched out of cork planks, compressed out of composites, travel up automatic lifts, drop down into huge crates and get zapped clean in machines worthy of a science fiction movie. One of Portugal’s most important industries faced an existential crisis twenty years ago from plastic corks, aluminium screw caps and the dreaded cork taint.

“I think that’s one of the biggest shocks that we ever faced in our industry,” is how António Amorim describes the Naughties. But thanks to improving technology, changing attitudes towards sustainability and a lot of investment money, cork is fighting back. It’s now hard to remember those days when plastic was the solution, rather than the problem – and it had the added advantage of stopping wines from being “corked” by an annoying little chemical called 2,4,6-trichloroanisol, or TCA for short.

To the human nose, the tiniest of tiny amounts of TCA can ruin a wine, making it smell musty like wet cardboard. “If you’re opening a bottle of champagne, and you have four or five nanograms (of TCA) in it, you will notice,” said Carlos de Jesus, Amorim Cork’s head of marketing and communication. “That’s the equivalent of eight drops of water in 800 Olympic sized swimming pools.”

Amorim claims to have removed cork taint once and for all with a combination of prevention, removal and quality control. I’ll save the explanation of thermal desorption and supercritical fluid technology reactors for another day – without the photos as it’s top secret and heavily patented technology. Amorim’s biggest concern now is not having enough cork for the increasing demand.

It takes 25 years before a cork oak’s first virgin bark can be cut, that – and the second harvest nine years later – isn’t good enough to make a stopper. So trees planted today wouldn’t make proper money for 43 years…and that’s too long for many farmers. Micro-irrigation systems could help cork oaks reach maturity in ten years rather than 25, but in the meantime there’s a solution: “I believe that if we are serious in the world about sustainability, we should consume everyday products that clearly can capture CO2,” said António Amorim.

So there we have it: protect the planet, drink wine.