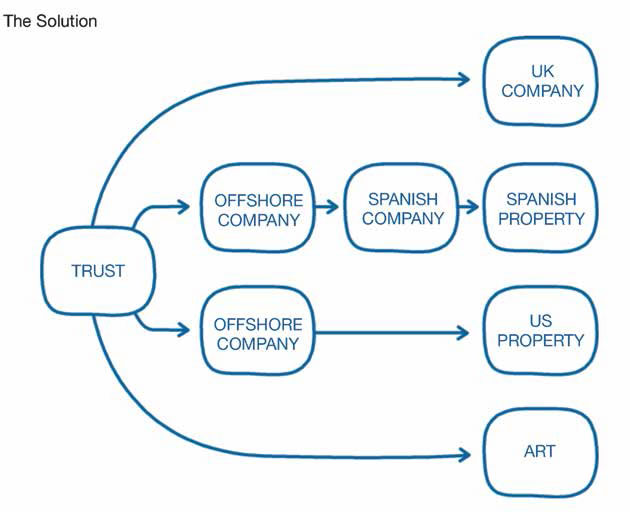 The Situation
Mr X lives in a country which charges IHT only on assets situated within the country but he has a large portfolio of foreign investments, which includes:

• shares in a valuable UK trading company;
• a holiday villa in Portugal;
• an apartment in New York;
• a large art collection in his home country.

The Problem
The UK, Portugal, USA and Mr X’s home country all charge IHT on assets physically located in their state.

The Solution
Mr X’s country of residence permits him to set up a trust structure to hold the assets. But particular attention needs to be paid to the way in which these assets are owned.

The UK assets are probably the most straightforward. There would be no charge to tax (stamp duty excepted) if the shares in the UK company are transferred to the trustees because this would be a sale by a non-resident and would therefore be exempt from UK capital gains tax. When the shares in the UK company are held by the trust, the death of Mr X would not represent a taxable event in the UK and UK IHT would therefore be eliminated.

If the Portuguese property were to be held directly by the trustees, an annual tax charge would be levied on the value of the property. This can be avoided by having the property transferred to a Maltese company (to avoid the annual tax on property owned by “blacklisted” countries), which in turn is owned by the trust.

On the death of Mr X, the US Revenue would make a charge to IHT based on the value of his New York apartment. That charge can be avoided by transferring the apartment to an offshore company whose shares are owned by an offshore trust. Careful consideration must be given to certain US anti-avoidance legislation to avoid the presumption that there has been a change of ownership and the consequent application of transfer or death taxes upon the death of Mr X.

The art collection can be transferred directly to the trustees. Care would have to be taken to ensure that Mr X does not retain benefit by having the use and enjoyment of the art collection throughout his life, whilst purporting to have divested himself of those assets. If this were the case, then the transfer to the trust might be ineffective in avoiding local IHT. But, if Mr X were to pay an annual fee for the use and enjoyment of the art, then local IHT should be eliminated.

If Mr X were living in a high tax country that levied IHT on a worldwide basis, then the foreign assets may be subject to IHT in their country of situation and also in Mr X’s home country. Credit may be given for capital taxes paid in one jurisdiction against capital taxes due in another but often there is a double charge to tax so the need for proper IHT planning is even greater.

In many countries the transfer into a trust attracts some form of transfer/gift tax, but with care that can be eliminated or reduced by making a sale of the assets, even if the purchase price is left outstanding.